The Great Lakes self-unloading bulk carrier Algolake was built by Collingwood Shipyards, Collingwood, ON and was launched for Algoma Central Corp., Sault Ste. Marie, ON on Oct. 29, 1976. The Algolake was the first Seaway sized vessel of this type (all cabins aft) built for this fleet. She is powered by two Crossley Pielstick 10PC 2V V-10 cylinder 4,500 horsepower diesel engines burning IF40 grade fuel driving a single controllable pitch propeller in a Kort nozzle giving her a rated service speed of 12 knots. She is equipped with a 1,000 horsepower bow thruster. Her capacities include 464 tonnes of fuel oil, 71 tonnes of diesel oil, 78 tonnes of potable water, and 16,740 tonnes of water ballast. The Algolake's 23 hatches feed into 5 holds where she can carry 26,900 tons at maximum Seaway draft of 26 feet and is capable of carrying 32,150 tons at her maximum mid-summer draft of 30 feet 1/2 inch. Her self-unloading system consists of a three-belt gravity system and a loop belt elevator feeding a stern-mounted 252 foot unloading boom that can be swung 90 degrees to port or starboard and discharge at a rate of up to 5,440 tonnes per hour. The system includes bulk flow gates and a variable speed belt. 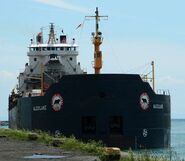 Winter Lay Up With The Algocanada

Lake Huron at buoys 1 and 2
Community content is available under CC-BY-SA unless otherwise noted.
Advertisement