From the time of her building, the CSL Niagara has been unique in setting fleet standards for her owners.  The self-unloading bulk carrier was launched December 16, 1971 and christened April 11, 1972 as the J.W. McGiffin for Canada Steamship Lines Ltd. of Montreal, QC. in honor of their Chairman of the Board of the CSL fleet at the time.  (Mr. McGiffin later died on September 2, 1998.)  The vessel was built by Collingwood Shipyards Ltd., division Canadian Shipbuilding and Engineering Ltd., Collingwood, ON as their Hull #197 at an approximate cost of $13 million (CN). Her construction marked the beginning of a new class of ships for this fleet.  The J.W. McGiffin was one of the first self-unloaders to be built primarily for the coal trade featuring a rounded bow, square stern, and was the first self-unloader built for the Canada Steamship Lines domestic fleet with all cabins and wheelhouse aft. It had been reported that the vessel was to have been given the Indian name "Nekouba" but was changed prior to her launch. She departed on her maiden voyage April 20, 1972 light from Collingwood, ON to Sandusky, OH where she loaded 30,624.45 net tons of eastern coal for Hamilton, ON. This first cargo established a new Welland Canal coal record when the vessel transited the system on April 25, 1972. 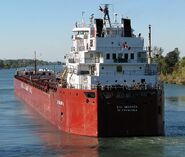 Downbound the Welland Canal below Lock 2.